Combining hands-on learning, individual exploration, and a celebration of Black History Month, Grade 7 students did a deep exploration on a figure from the Harlem Renaissance, including Langston Hughes, W.E DeBois, and Josephine Baker.

After learning about the time period and contextual history of the Harlem Renaissance, students chose a figure that spoke to them, someone that they connected with, or that their work was particularly resonant to.

After writing a short biographical summary of their chosen figure, each student picked three pieces of their chosen person’s work and wrote ‘museum labels’ describing them, from their famous works, dance numbers, songs, poems, novels, and more. Here are some of their labels:

Kansas-born Aaron Douglas was the leading visual artist of the Harlem Renaissance, the great flowering of the arts in 1920s and 1930s in New York’s predominately African American neighborhood. Rendered in Douglas’s flat, silhouetted style and with lavender and yellow-gold hues, this work depicts the Old Testament story about God’s order to Moses to lead the Israelites out of captivity in Egypt. Ministers, abolitionists, and politicians from the nineteenth-century through the Civil Rights era have related this story to the oppression of African Americans. Light symbolizing God’s command radiates down and envelops the kneeling figure of Moses. Douglas derived this composition from a design he created in 1927 for God’s Trombones: Seven Negro Sermons in Verse, a collaboration with author and activist James Weldon Johnson.” 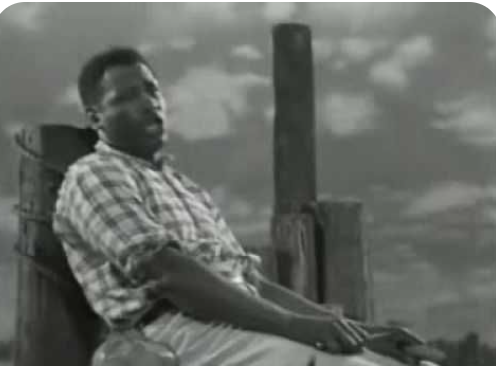 “Ol’ Man River” is a song from the 1927 musical Show Boat  Starring Paul Robeson that shows the struggles and hardships of African Americans juxtaposed with the endless, uncaring flow of the Mississippi River. It is sung by a black man on a showboat, and is by far the most famous song from the show. Jerome Kern and Oscar Hammerstein II’s musical version of Edna Ferber’s novel illustrates the lives of “Cap’n Andy” and his troupe of traveling showboat performers, including his naïve daughter Magnolia, her gambling husband Gaylord Ravenal, the tragic mixed-race actress Julie, and black stevedore Joe, who marvels at the constancy of the “Ol’ Man River” they travel on.

Out Chorus is a painting that shows a jazz band. Jazz bands became popular around the 1920s and were a significant part of the Harlem Renaissance. Bearden used bright colors to visually represent the complex music type. In a jazz band individual voices blend into a complete and balanced composition. In Bearden’s collages he created movement and balance as if one could hear the jazz band playing. Bearden created Out Chorus with layers of paint added over the paper. Each layer of paint adds a piece of information to the artwork, playing an important part of the whole work.

The Diving Boy, made before 1940, was sculpted as a gift for Ninah Cummer, who already had one of her other pieces. Originally The Diving Boy stood at one end of a pond in Ninah Cummer’s Italian Garden. The Diving Boy is a bronze sculpture that looks like a boy shivering, waiting for a towel. “When my sons were young – they would step from the bathtub waiting for me to wrap them in a towel… the connection has nothing to do with diving, but the love and warmth of a mother’s love for her young sons.”

Augusta’s work was important to people because it symbolized many things happening in the world and the African American community.

Studying their seminal works and creating museum labels allowed students to gain deeper insights into their chosen figure, and that person’s motivations, inspirations, challenges and contributions. As the two culminating pieces of this project, students created a collage inspired by, and/or using pieces from their figure’s life and work, from their books to poems to dances.

Finally, they wrote artist statements about their collages, reflecting on the philosophy and lasting legacy of their chosen artist, and the lessons these figures can teach us across space and time.

One student shared, “I think that this collage has influenced me to look at different art that I come across in the future as not just a piece of art but as a story.”